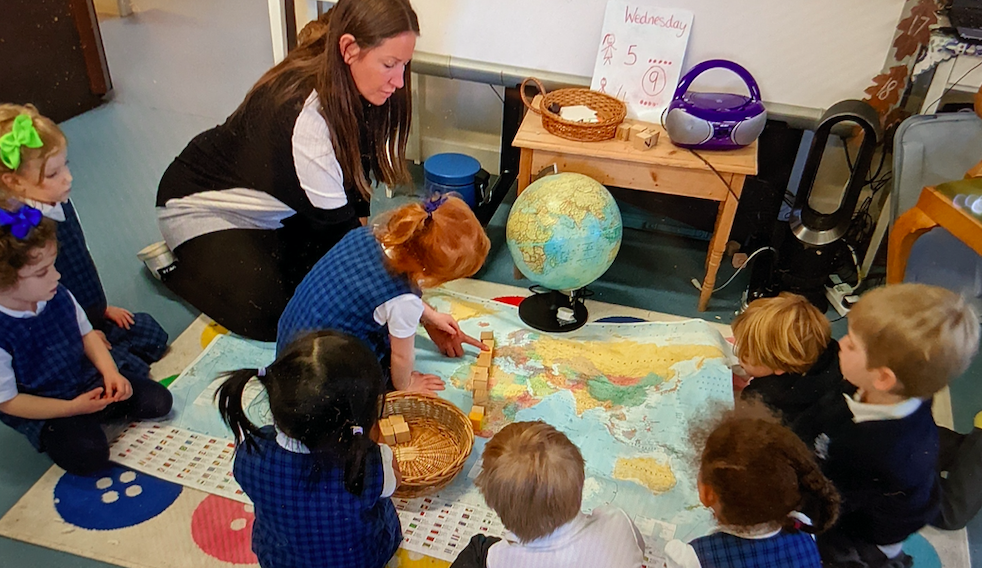 This term, the Caterpillars decided to blast off into space….but first they needed a rocket! The children loved getting involved in the planning process and thinking about how they would need to construct their method of transportation. They found some pieces of cardboard and lots of foil, along with milk bottle tops to use as buttons and colanders for space hats. The children enjoyed using different media to create a variety of effects on the foil as well as using items from around the classroom as props to support their play. Mr Owl, from the story of ‘Whatever Next’,  came to visit and left some moon boots and a special box with some items to have a picnic on the moon. The children had lots of fun pretending to walk like a spaceman. It was then time to return back to earth where the glitter began to sprinkle and the cabin was filled with festive fun! The role play area quickly became a post office where the children have been weighing and wrapping presents along with writing and posting letters!

At the start of term, the Butterfly children had lots to talk about relating to the changes in weather as the leaves began to fall and the frosty mornings made an appearance. They gathered some leaves and explored their differing shapes and sizes and talked about how they were all different…just like us!

Our attention quickly turned to the frosty mornings! As always, the children couldn’t wait to get outside as they were enthralled to find that the water in and around the garden had frozen over night.

It was then time to start practicing for our Nativity! The birth of baby Jesus led to lots of role play, which promoted their discussion about families and new babies. The children worked very hard learning their lines and songs!

As Christmas fast approached, the children enjoyed decorating the classroom and making a Santa’s grotto! They helped to make a firplace, decorations for the tree, a nice cosy area along with a little table, which they decided was going to be a little office where they could help Santa get all his jobs done and write letters back to all of the children.

Mr Bell has been focusing on ball skills by aiming and rolling a ball at an object with speed. Mrs Gallimore has been busy teaching the children animal names as well as singing ‘Jingle Bells’ in Spanish, which I am sure you will have heard the children performing ‘Casca Bell’ on numerous occasions!

Working together • So good to be able to have Ye

A beautiful start to the week over @burtonhathowpr

The lights are on, we are back! • Hope everyone

U11 Mixed Netball - St Hugh's vs Burton Hathow (away)

Second Half of Spring Term

Get in touch to book a personal tour or to enquire about your childs place.

Send us an enquiry